A couple of weeks ago the BBC reported on International Burger Day (yes, really). Are you sitting comfortably? Here are some of the weirdest burgers in the world.

From the sublime (gold and caviar) to the ridiculous (frog’s legs), there are no limits to human imagination!

A burger or a hot dog? Both! A burger with a sausage running through its centre, the Hamdog was introduced in 2004 by Mark Murray from Perth, Australia. Murray underwent a patenting process himself in order to save money on legal fees, despite being told without help he had “more chance winning an Olympic medal”. “A lot of people shut up in 2009 when I was given the patent,” Murray has said.

Apparently many food outlets in the US have a version of this. In 2014, Mister Donut collaborated with the Japanese fast food franchise Mos Burger on the MOSDO!, a burger using “a spiral-shaped chorizo, lettuce and spicy chili sauce sandwiched between Mister Donut’s French Cruller donut as the buns”. Ew.

Invented at a restaurant called PYT in Philadelphia, USA, the Spaghetti Burger features a mozzarella-stuffed meatball patty, red sauce, and spaghetti “cooked into tasty garlic butter buns”. It is not the first PYT has turned pasta into a burger bun – previously there was a deep-fried lasagne burger. 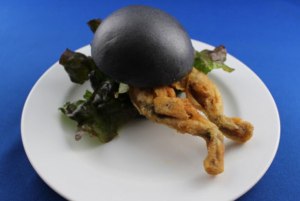 Japan’s Orbi Yokohama Museum – weirdly, a wildlife theme park – offers a burger with frog’s legs (sticking out). The black bun is said to be coloured using charcoal and features a deep-fried whole frog – body, head, legs – sandwiched between a pitch-black bun and served with sweet chili sauce and a small amount of soy sauce-flavored chicken, for “purposes of comparison” according to a spokesperson. The burger was launched to celebrate an exhibition at the museum called “Deadly Poison”.

WordstoDeeds Masterclasses 2021 – Still time to book for the remaining 2 in the series!