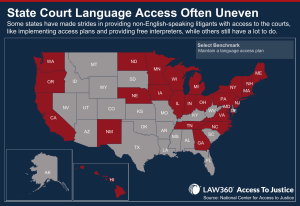 Law360, the provider of legal news, intelligence and analysis, has just published a piece on access to justice in the USA for non-English speakers. Here are some points that stood out for me…

A few states are doing relatively well, but generally speaking no one’s doing great and some people are doing positively awful,” according to James Gamble, director of the Justice Index Project at the National Center for Access to Justice.

Only 37 states require courtroom interpreters to be certified, according to data from NCAJ. Just 14 evaluate the effectiveness of individual interpreters.

Even in states where interpreters are certified, applicants only have to score 80% to pass the federal exam and just 70% to pass some less-rigorous state exams, according to Virginia-based court interpreter Patricia Michelsen-King.

By contrast, California’s Court Reporters Board and the New York State Court Reporters Association require court reporter applicants to achieve 97.5% and 96% accuracy, respectively, according to their websites.

I have seen where cases were lost by the defense or by the prosecutor because they didn’t have a competent interpreter,” said Michelsen-King.

But most advocates say it’s far better to spend that money upfront to ensure people aren’t evicted or lose custody of their children simply because they don’t speak English rather than having to spend it down the road.

Are you going to have the resources to try the case again because it’s been appealed?” Michelsen-King asks. “If these cases come back, then you’re still spending the money, and [it’s] better to get it right the first time.”

Hat tip to Anila Scott-Monkhouse for pointing this out to me.