Early English Laws is a project to publish online and in print new editions and translations of all English legal codes, edicts, and treatises produced up to the time of the Magna Carta in 1215.

The aims of the project are:

In the screenshot below you can see how a source text (Æthelberht’s Code) and its translation are presented side by side. 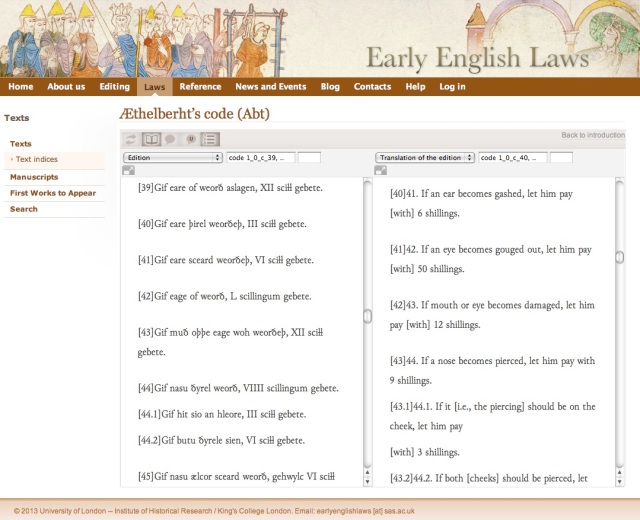 The following screenshot shows a translation of Cnut’s Oxford Code, 1018. 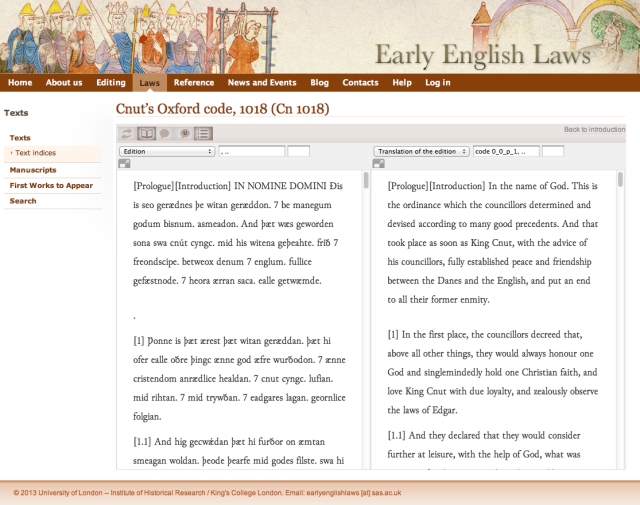 In the “Laws” tab, select “Texts” from the left-hand menu. From the list of laws, click in the column “Name of text”. In the next screen, click on “Edition” under “Digital Edition”. You can then choose “Translation of the edition” from the right-hand drop-down menu.

Translations do not seem to be available for all texts – this is work in progress. As well as the two examples for which I have provided screenshots, Æthelberht’s Code and Cnut’s Oxford Code, I also found Leges Edwardi Confessoris, and Wihtræd’s Code.

As well as the translations, the project website includes, to name just two resources, online original documents (click on the “Laws” tab, then “Manuscripts”,  then the sigla on the right to open the viewer – “Open book”); and a glossary (to access within the website click on the “Reference” tab and then “Glossary” in the list).

However, I suggest digging around, as the website also contains many other resources too.

The Early English Laws project is supported by a collaboration between the Institute of Historical Research at the University of London and the Department of Digital Humanities at King’s College London.