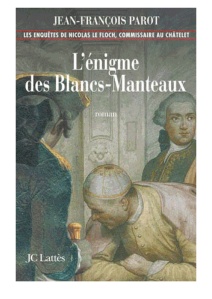 Today being Friday, I thought a little fiction might be in order to round off our week of books.

I am a great fan of the series of detective novels written by Jean-François Parot (a diplomat and historian) and set in 18th century Paris, the hero of which is Nicolas Le Floch, Marquis de Ranreuil, commissaire au Chatelet.

The “Nicolas Le Floch” series has been translated from the original French into Italian, Spanish, English, Russian, Japanese and Czech. A beautifully made (in my opinion) television series has also been broadcast by the channel France 2 and is sold on DVD.

There are 12 novels so far, beginning in 1761 when the young Nicolas arrives in Paris having been a notary’s clerk. He joins the police, and gradually rises in rank, becoming close to more than one king… well – you’ll need to read them to find out the rest!

The author’s website has some fascinating content, The book publisher’s site has some video and audio extracts too.