This week is proving to have a distinctly hispanophone flavour. That has had me dreaming about tapas of course… hoping to indulge on a possible work trip to Madrid in the near future.

Anyway, back to dictionaries. This recently published work was brought to my attention by Professor Esther Monzó at University Jaume I (Spain). She thoroughly recommends it, having had personal experience of the original glossaries.

Here are some details from the press release:

The author, Antonio Peñaranda, earned a doctorate in law and subsequently worked at the International Telecommunications Union (ITU) in Geneva, where he progressed from translator to reviser and then to manager, his interests centering on the legal aspects of international telecommunications regulation. Following his retirement from ITU, Antonio was asked by the Spanish Translation Section at UNOG to teach a series of introductory legal seminars for language staff on the topics of criminal procedure, international human rights law and public international law.

The first of these – a seminar on comparative criminal procedure – provided the inspiration for his book, the title of which translates literally as: ‘Criminal procedure in Spain, France, England and the United States: Description and Terminology‘. 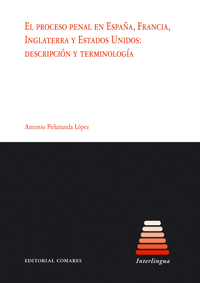 Published as part of the Interlingua collection by Editorial Comares of Granada, Spain, this practical reference – half description and half terminology – has taken its place alongside some 98 other titles on translation, interpretation and related studies. It stands out as a concise and authoritative introduction to criminal procedure in four countries, distilled through the translation of the key terms used in each system.

While the descriptive part will be accessible to all interested readers of Spanish, the two glossaries – one English-to-Spanish and the other French-to-Spanish – are geared primarily to writers and linguists working in those directions. Yet linguists working in the opposite directions will also benefit, given that the glossaries afford a glimpse into authentic Spanish expression as revealed through the exercise of inverse translation.