It is an honour for me to introduce today’s guest post, by a man who has practiced as an attorney in two languages, taught legal English at a prestigious law faculty, and had wide experience of court interpreting and depositions – Jonathan Goldberg.

California, and Los Angeles in particular, is home to a mix of ethnic populations. This is reflected, for example, in the family names of the former Governor of California, Arnold Schwarzenegger (born in Austria), the Chief Justice of the Supreme Court, Tani Cantil-Sakauye (from a Philippine family) and Antonio Villaraigosa (of Latino ethnicity).

I am one tiny speck on the map of immigrants who have made Los Angeles their home—but my genealogical path may have been more circuitous than that followed by many others who have settled in this city. My maternal grandparents were born in Russia and, like millions of Jews of their generation, fled persecution. They settled in a tiny island off northern Wales, where my mother was born. My paternal grandfather was born in Belarus, moved to India where he married and later brought his wife and my father to South Africa. My father studied in Scotland, where he met my Welsh mother. They returned to South Africa, where I was born.

A court trial at which I interpreted in Los Angeles for a Senegalese plaintiff (Cherif) and a Cameroonian witness (Sylvie) led me to reflect on their genealogy as well as that of others present in the court room. (I learned that the jury included persons born in Iran, China and Russia, but their story is not relevant to the colonial theme that this article takes up). The judge’s name was Fruin (an old British name); his Protestant forefathers probably left England for the American colonies. That included the court reporter Mrs. Brown, who bore a name shared by many African-Americans whose ancestors were assigned standard English names when they arrived in America as slaves.

My role as an interpreter is to interpret questions put to the plaintiff and witnesses by attorneys for both parties, as well as the responses to those questions. In the present case, I interpreted the lawyer’s cross-examination from English into French and answers from French into English. 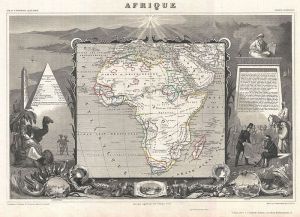 That the plaintiff and the witness, both born in West Africa, requested a French interpreter (interpreters are provided to trial participants in Los Angeles in every conceivable language and in many dialects) bears testimony to the ongoing influence of the French language in Africa, 50 years after France relinquished its last colonial possession. That the person chosen to provide the French interpretation in a Californian court was born in South Africa and speaks English as his mother tongue is part of British colonial history. Durban, a port on the Indian Ocean where I was born, had become a city when a party of British settled there in 1824; they later named it after  Sir Benjamin d’Urban, a name of French locational origin: D’urban, or d’Urbin in Languedoc.

If France and Britain had never colonialized Africa, I (or someone else with similar DNA) might be living in Belarus or Russia, not knowing a word of English. The plaintiff and the witness, even if they had come to Los Angeles and been involved in this lawsuit, might have requested interpreters in one of the hundreds of languages spoken in the Cameroon or one of the dozens of languages spoken in Senegal.

If slaves had not been brought to the US, a white-skinned person might have been recording the testimony, instead of Mrs. Brown, the black court reporter. If Mexico hadn’t ceded California to the United States by the Treaty of Guadalupe Hidalgo, trials taking place in Los Angeles might have been conducted in Spanish.

But the mass emigration of Jews from Eastern Europe did take place, as did colonization, slavery, and the Mexican-American War. It’s not difficult to believe that other factors, such as the Californian sunshine, may also have drawn people from different corners of the world to Los Angeles. But in my case, the reason was personal/romantic.

So here I am, linguistically a vestige of British colonialism, communicating in my brand of English with American Angelinos, bridging the gap between “two nations divided by a common language” and removing the language barriers between those Americans and other “natives” upon whom the British and French colonial powers endowed the benefit of two of the world’s most widely spoken languages.

Did the plaintiff win his case? I will never know. Interpreters are relieved of their task the moment the witnesses in a trial have completed their testimony in the foreign language. At the conclusion of my assignment, the judge thanked me profusely with all the politeness appropriate to his British ancestry. But the implied message delivered by the judge to the interpreter is: “Mr/Madam interpreter, you have now outlived your contribution in my courtroom. Please let us continue to conduct this trial in a language we can all understand.”

The above article first appeared in Translorial, the journal of the Northern California Translators Association.