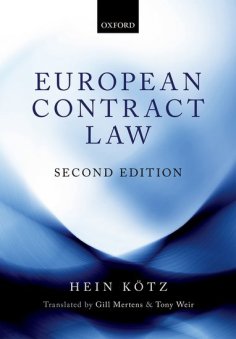 I am delighted to inform you that the Second Edition of European Contract Law by Hein Kötz – showing the translators’ names on the cover 😉 has just been published by Oxford University Press.

It is available as a hardback and also as an Ebook.

Hein Kötz is a highly distinguished German comparative lawyer who has authored a large number of books on German contract and commercial law. He is also the co-author, with Zweigert, of the reference work An Introduction to Comparative Law, which has been translated into several languages including Italian, Chinese, Japanese, and Russian.

Here is the publisher’s blurb:

“This new edition of European Contract Law examines the contract rules of several different European jurisdictions, including the most important civilian systems and English common law, while attempting to articulate general principles which are common in all of them.

While the first edition was limited to a comparative analysis of the rules on formation and validity of contracts, agency, third party beneficiaries, and assignment, the second edition now also includes contractual remedies and various updates and revisions of the first edition, especially in light of the recent changes to the French Code civil. Furthermore, the book comprises a wealth of translated extracts of legislation, cases, and academic literature, comprehensively covering all aspects of contract law.”

The book was originally published in German to considerable acclaim. This English edition has been translated by Gill Mertens, building on the work done by the translator of the first edition, Tony Weir.

Those of you who were at #W2D2017 may remember meeting Gill Mertens there.