The Université du Québec à Trois-Rivières is organizing the Second International Conference on Economic, Business, Financial and Institutional Translation (ICEBFIT), to be held from 17-18 August 2016.

END_OF_DOCUMENT_TOKEN_TO_BE_REPLACED

A spoof news report led to quite a few red faces in Quebec a couple of weeks ago. CBC Radio ran a story about a new City bylaw which was to require dogs to learn French and English commands, otherwise “dog parks would descend into chaos”. City employees were to be on hand to administer comprehension tests for basic commands.

The ‘new bylaw’ came in a context of disputed language laws in the province (see this post about retailers’ signs), and therefore, it seems, was considered quite plausible.

END_OF_DOCUMENT_TOKEN_TO_BE_REPLACED

The major brands Walmart, Costco, Best Buy, Gap, Old Navy and Guess are taking legal action against the Government of Quebec. This follows language requirements issued by Quebec’s language watchdog, the Office québécois de la langue française, according to which firms either need to have a generic French name or to add an explanatory byline in French.

The legal issue revolves around this being simply a new interpretation of an old law¹, whereas according to the retailers, no new legislation has been passed.

END_OF_DOCUMENT_TOKEN_TO_BE_REPLACED 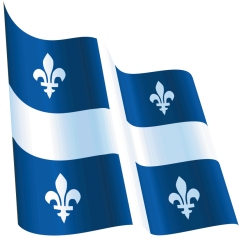 The end of this week has a decidedly Canadian flavour after yesterday’s post about McGill.

In December last year, Quebec’s Minister of Justice and Attorney General Jean-Marc Fournier announced the filing of a draft regulation aimed at making the Gazette officielle du Québec available free of charge on the Internet. The regulation is now in force and allows free access to Parts 1 and 2 of the Gazette on the website: http://www3.publicationsduquebec.gouv.qc.ca/gazetteofficielle.fr.html